The “War on Women”: Myth or Reality? 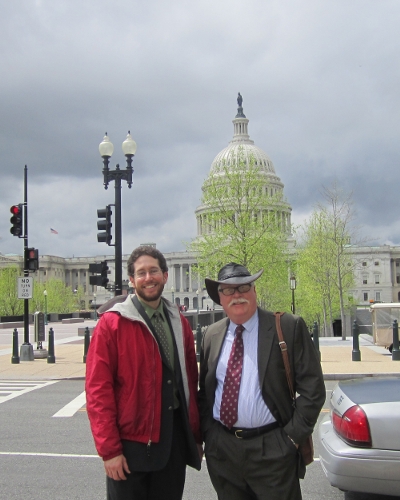 Synopsis: In the last election, proposed restrictions on “reproductive rights” led Democrats to accuse Republicans of waging a “war on women,” a war which many believe cost Romney the female vote. But is there really a “war on women”? And if so, are the issues those raised in November, or are there other, deeper concerns at stake?

Photo: Ryan MacPherson (left) and Allan Carlson, at the U.S. Capitol for The Family in America.

The “war on women” we are discussing today really amounts to a debate over the definition of womanhood set forth fifty years ago by Betty Friedan in The Feminine Mystique: a woman cannot be content to be defined primarily as a wife or a mother, but instead must find fulfillment through the pursuit of higher education, the advancement of a career outside the home, and the liberation of her body from nature’s calling to bear children. But it also is a debate about whether women can, if they wish, truly have it all—a career and a family. And if these notions fail to stir up enough controversy on their own, there’s more: what about men? Can they have it all? In the final analysis, the war on women cannot be separated from another war, a war on men—indeed, a war against the optimal relations between men and women and their children and the societies that they form.

Most significantly, Kimbrell detected that “men are increasingly torn between the necessities of their job and their desire to have time for their families.” Yes, men, too, suffer from a problem that has no name.

“The Problem That Has No Name”—that was the title of Friedan’s opening chapter. There Friedan verbalized what countless housewives thought and felt but did not know how to say: the American dream was a disappointment for women. Marriage, children, a house in the suburbs full of modern conveniences—all these trappings of success failed to satisfy the deeply human yearnings of women—at least for the middle-class, college-educated women whom Friedan had interviewed.

And so Friedan promised women that they could have it all—a career if only society would let them and a family if they wanted—but men are discovering this dream to be just as ephemeral for them as it has been for women. Why so out of reach? Perhaps because it is just as unnatural for men to pursue a career apart from their families as it is for women. As Kimbrell explained:

The separation of men, and men’s work, from the family may well be the most significant personal and social disruption men have ever had to face. For generations industrial society has been conducting an unparalleled anthropological experiment: What is the effect of virtual father absence on the family, children, and the redefinition of men’s role in society?

Culturally pervasive images of manhood reduce half the human species to, at best, “productive, emotionless, competitive machines” or, at worst, promiscuous animals. Either way, precious few men model the virtues of “generative, caring fathers” to their own children, much less to the broader society. 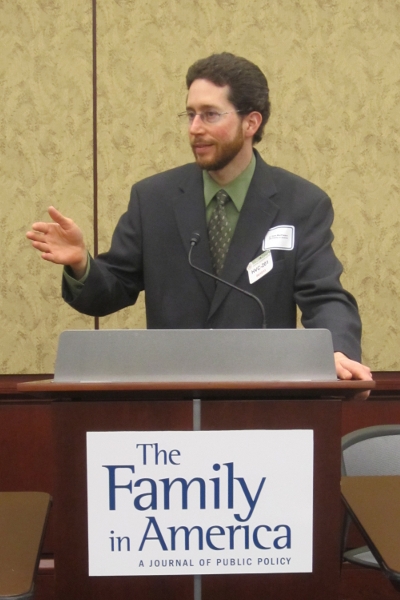 Kimbrell’s analysis closely tracked that of Alexander Mitscherlich’s Society without the Father, which first had been published in 1963, the same year as The Feminine Mystique. Originally entitled Auf dem Weg zur vaterlosen Gesellschaft (literally, On the Way toward a Fatherless Community), the 1991 English printing of Mitscherlich’s opus expressed in its translated title the completion of the transition envisioned a generation earlier: Society without the Father. By the 1990s, American (to say nothing of German) society had become fatherless in two significant respects. First, as Mitscherlich had warned in 1963, the “working, teaching father” had gone extinct, replaced by a father who still works, but now out of his children’s sight, and therefore he cannot teach because he is not present to model for them how work is done. Children of the industrial era have been raised typically by “invisible fathers,” by which Mitscherlich meant “the disappearance of the father image so closely associated with the roots of our civilization, and of the paternal instructive function. The imago of the working father is disappearing and becoming unknown.” Mitscherlich made clear that he did not here mean only the occasional physical loss of a father due to divorce or death, but also the near universal social displacement of the psychological father who nurtures his sons in the discipline of meaningful labor. Mitscherlich ascribed the cause of this displacement chiefly to industrialization.

Mitscherlich next posited “fatherlessness of the second degree”: the disappearance of tangible, personal relationships from authority structures beyond the family. Children raised in the absence of a teaching father become absorbed into a mass “sibling society” in which an anonymous bureaucracy, not an authoritative individual, governs. The absence of identifiable leadership fosters a conformity that cannot easily be challenged, because one is not sure who is responsible for directing its course. Not only was Mitscherlich’s work insightful, it also was predictive. America has become that second-order fatherless society of neutered siblings seeking their individual shares of an egalitarian utopia.

By the century’s end, a generation of men who had never observed their fathers working—but at best had only seen them go away to work—had themselves become fathers of sons about to enter an uncharted territory, Guyland. Sociologist Michael Kimmel explains that Guyland is “a kind of suspended animation between boyhood and manhood,” broader and deeper and more perplexing to its inhabitants than the “adolescence” introduced a century earlier by psychologist G. Stanley Hall. As Kimmel described in Guyland: The Perilous World Where Boys Become Men (2009):

Guyland is the world in which young men live ... unhassled by the demands of parents, girlfriends, jobs, kids, and other nuisances of adult life. In this topsy-turvy, Peter-Pan mindset, young men shirk the responsibilities of adulthood and remain fixated on the trappings of boyhood, while the boys they still are[,] struggle heroically to prove that they are real men despite all evidence to the contrary.

Guyland is the millennial generation’s “sibling society,” a subculture of conformity in which young people try to become individuals but lack an appropriate model for male maturity. Oddly, Kimmel denies that Guyland is “a case of prolonged adolescence,” and yet surely the aimless drift of today’s video-game playing college sophomores was unknown to pre-industrial societies in which boys became men by working with fathers and uncles who mentored them. 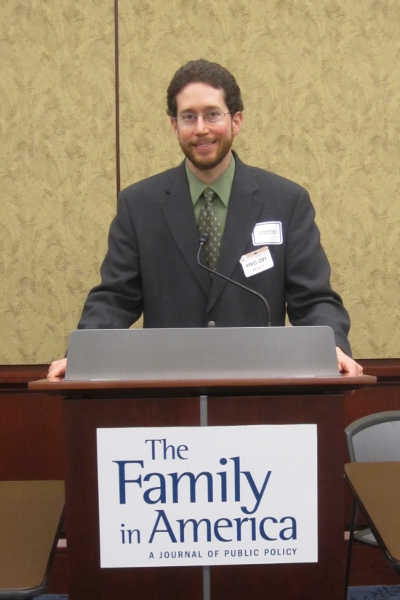 But let us leave Guyland behind and return to the insights on womanhood and manhood provided by Friedan and Mitscherlich. Both of these authors emphasized the importance of education, but beyond that facile comparison they shared little agreement. Friedan envisioned intensive “intellectual ‘shock therapy’” programs to prepare housewives to compete successfully against men in the job market. Bowing before the altar of the college diploma, she professed, “education, and only education, has saved, and can continue to save, American women from the greater dangers of the feminine mystique.” Mitscherlich, by contrast, offered a child-centered view of the social order, in which the training of children by their parents should receive high priority. He saw this task as “essential for the survival of the specifically human way of life.” For Mitscherlich, “education” was not a utilitarian device for delivering information or skills to future employees; it was a formative enterprise, a lifestyle for shaping a child’s character by developing relationships of trust within the family and, by extension, the community.

Fifty years after Mitscherlich’s Society without the Father and Friedan’s The Feminine Mystique, America has a more pressing need than improving career opportunities or expanding education for women. Already women outnumber men in both college enrollment and college graduation rates, at the bachelor’s, master’s, and, in recent years, doctorate levels. While men may still outnumber women as CEOs of Fortune 500 companies, the lived experiences of many employees is that women not only work along side men, but also serve as their supervisors. The equality debate has run its course, but still something of fundamental human value is missing.

Our nation now needs a revival of domesticity among women, men, and their children. Public policies that encourage homeschooling, home entrepreneurship, family flextime in the workplace, and a shorter work week may prove more helpful than those that focus on gender equality in the labor market. To require employers to treat all workers identically simply reinforces the career mystique’s distorted view that a worker is a worker and nothing else.

The “career mystique” holds that adult life cannot be fulfilling apart from continuous, paid employment away from home in a field that one selects and enjoys. As in the mid twentieth century, so also today, long hours of hard work for paid employment away from one’s family somehow are expected to deliver the American dream, whether that dream be a house full of children in the suburbs or, as Friedan emphasized, the self-actualization of one’s individual identity. As a program of deferred gratification, the career mystique also guarantees a lifetime of income security, stretching into retirement, in exchange for the decades of labor during one’s prime. But this mystique seldom has delivered its promises.

Unfortunately, the typical male careers of the mid twentieth century provided poor models for women to follow. Postwar careers—as codified by Social Security, healthcare, and retirement plan regulations—essentially required a 4o-hour (or longer) work week to be consistently maintained for four consecutive decades of one’s life. Because this schedule left precious little wiggle room for family caregiving by the working spouse, career and family success required a division of labor between the breadwinner and the homemaker. The career mystique and the feminine mystique were, therefore, not alternatives as Friedan suggested, but rather two sides of the same coin. 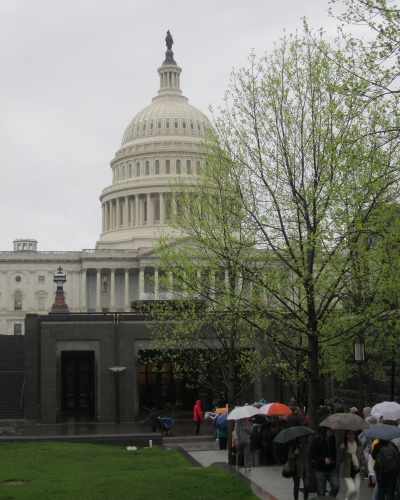 Nevertheless, many women—and a growing number of men—attempted during the late twentieth century to maximize their potentials simultaneously as a spouse, a parent, and an employee, only to discover that real wages were declining, as was the quality of their family relationships. Moreover, the declining earning power of men eroded their identities as family providers while women expanded into the role of co-breadwinner.

Wives and mothers of the past generation left their homes for careers, rather than working with their husbands to bring productive labor back into the home; women thought it would be easier to put childbearing on hold while the career never paused, only to discover too late that fertility is easier to shut off than to turn back on; children, instead of spending plenty of time with mom and not enough with dad, soon found themselves spending hardly any time with either parent while being whisked from daycare to school to after-school care to sports practice to a future for which no one had ever modeled for them the commitment, cooperation, or constructive power of familial interdependence.

Mitscherlich reminds us that what was once true of work, also was true of education: character formation passed from parent to child through shared, meaningful activities. A revival of the “working, teaching parent” can rescue both masculinity and femininity from the modern mystiques of impoverished definitions that limit human flourishing. If Yahoo CEO Marissa Mayer has correctly concluded that employees work more productively and creatively when meeting face-to-face, then shouldn’t our nation also be asking how to maximize the face-to-face opportunities for husbands, wives, and children in order that our homes, too, may again become wellsprings of prosperity?