How Do You Spell “Jesus” in Hebrew?

Adapted from a devotion delivered, in conjunction with a slide show of the Holy Land, at Shepherd of the Bay Lutheran Church, Lusby, Maryland, on August 6, 2000.

I have shown slides of Israel to many audiences. Each time I do it a little differently, but I like to keep some things the same. My second favorite slide is the one I use for a “Hebrew Quiz.” You should hear Sunday school children giggle when I tell them to get ready for the Hebrew Quiz. “I know you’ve all been studying Hebrew, right?” Then my second favorite slide appears: it shows a restaurant with golden arches and the Hebrew word for “McDonald’s.” Everyone always scores 100% on this quiz. 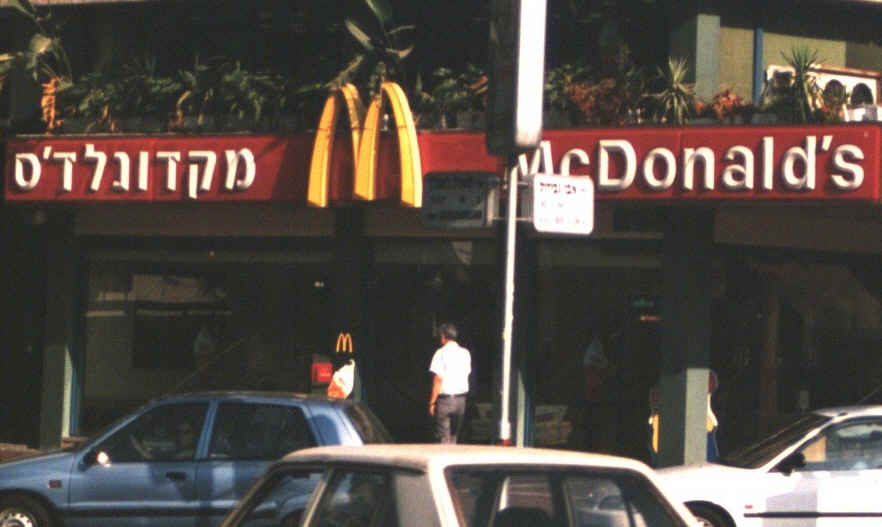 My favorite slide is a picture of the floor.

You will not see it in any travel brochure, but I consider it the most important slide I have ever taken. The floor is made of tiny colored stones, called mosaic tiles. The stones vary in color and have been pain-stakingly assembled to form a pattern. The pattern spells out words in Hebrew. The words comes from the Old Testament. The stones are naturally colored, not painted. This means that the Bible verses they spell will never fade away. Perhaps now you are starting to realize why I consider this slide to be so important.

One or maybe several people dedicated so many careful hours to assemble the tiny stones in order to spell out, letter-for-letter, some words that we find in our Old Testament lessons for today (the ones set in bold print):

But the LORD was gracious to them and had compassion and showed concern for them because of his covenant with Abraham, Isaac, and Jacob. To this day he has been unwilling to destroy them or banish them from his presence. (2 Kings 13:23)

Among these were some from Judah: Daniel, Hananiah, Mishael and Azariah. The chief official gave them new names: to Daniel, the name Belteshazzar; to Hananiah, Shadrach; to Mishael, Meshach; and to Azariah, Abednego. (Daniel 1:6–7)

To be honest, my sinful heart considers the Chronicles passage (a genealogy of all things!) to be the most boring section in the whole Bible. Why would someone spend so much time carefully spelling it, word-for-word, into a mosaic floor?

Whatever our preferences are, the Jewish people who made the mosaic floor for their synagogue chose some verses that list a bunch of hard-to-pronounce names: Mahalalel and Methuselah; and later on: Hananiah, Mishael, and Azariah (also known as Shadrach, Meshach, and Abednego). What do you suppose the value is of going to so much trouble just to record all of these names?

Archaeology can only provide tentative answers. In this case, archaeologists believe that the people who made the floor were opposed to Christianity. Even so, the words that those people spelled into the floor still proclaim the Christian gospel because they are God’s words, straight out of the Bible. Archaeologists have some ideas about why those words matter, but the Holy Spirit provides so much more certainty than archaeology ever could.

In Scripture, we learn exactly why those names matter. And Scripture — the Word of God — tells us what those names mean, even if the people who made the floor or the archaeologists who later unearthed it did not understand the full significance of those names.

To learn why those names in the genealogy matter, let’s first recall God’s promise way back in Adam’s day: his wife Eve’s offspring would “crush [the devil’s] head” (Genesis 3:15). Adam told this to Seth, and so on down the line through Noah to Abraham. God spoke to Abraham directly, promising, “all peoples on earth will be blessed through you” (Genesis 12:3). St. Paul writes that this verse “announced the gospel in advance” (Galatians 3:8).

When the Babylonians conquered Judah, dragging the Jews out of their Promised Land and into foreign captivity, it must have been difficult to believe God’s promise to Abraham. Jeremiah cried out in sorrow to the LORD, “Why do you always forget us? Why do you forsake us so very long?” (Lamentations 5:20). The LORD answered: “When 70 years are completed...I will fulfill my gracious promise and bring you back” to the Promised Land (Jeremiah 29:10). That way the Savior could be born in Bethlehem, just as God had promised through Micah (Micah 5:2).

By quoting God’s Word, the mosaic floor traces God’s promise. Even though the Jews had been taken to a foreign land and ruled over by a foreign king who did not know the LORD, God’s promise still applied. God was faithful to deliver Shadrach, Meshach, and Abednego from Nebuchadnezzar’s furnace. God even caused King Nebuchadnezzar to write into law, “Praise be to the God of Shadrach, Meshach, and Abednego . . . for no other god can save in this way” (Daniel 3:28,29). God also rescued Daniel from the lions’ den (Daniel 6).

From Adam to Noah to Abraham to Daniel to the Jews who made the mosaic floor, God’s promise remained, and even now remains, continuously in effect. The promise means that the Savior would (and for us in the New Testament era, already has) come to deliver his people from their sin. (See Job 19:25–27; Psalm 22; Isaiah 53; Micah 5:2–5a; Zechariah 3:8–9; and many more!)

Not only was God’s Word a lamp to the Jews’ feet (again, Psalm 119:105), it also was a floor under their feet. After recording the names of God’s servants on their floor, they could stand on something really solid: the promise that God gave to those men, and through them, to all people. That’s why the mosaic floor is my favorite slide.

Sunday school children have great curiosity, so I have had to answer many questions when presenting my slides of Israel. One question stands out among them all:

“Mr. MacPherson, how do you spell ‘Jesus’ in Hebrew?”

If only the rest of us could keep our priorities as straight as that child. Archaeological expertise may say what it will, but it takes someone with faith like that child’s to understand the spiritual significance of that mosaic floor. If you think about it, the floor was John 3:16 in the making: “For God so loved the world, that he gave his one and only Son, that whoever believes in him shall not perish but have eternal life.”

The Old Testament names in that mosaic pointed to the New Testament revelation of Jesus. It is as if the genealogy that traced God’s gospel promise, and the list of men in Babylon who risked their lives for that promise, were gradually spelling out “Jesus” in Hebrew. Consider how our New Testament lessons refer to those Old Testament people in order to point us to Jesus:

Theirs [i.e., belonging to the Israelites] are the patriarchs [i.e. Abraham, Isaac, and Jacob], and from them is traced the human ancestry of Christ, who is God over all, forever praised! Amen. (Romans 9:5)

By faith Moses, when he had grown up, refused to be known as the son of Pharaoh’s daughter. He chose to be mistreated along with the people of God rather than to enjoy the pleasures of sin for a short time. He regarded disgrace for the sake of Christ as of greater value than the treasures of Egypt, because he was looking ahead to his reward....And what more shall I say? I do not have time to tell about Gideon, Barak, Samson, Jephthah, David, Samuel and the prophets, who through faith conquered kingdoms, administered justice, and gained what was promised; who shut the mouths of lions [i.e., Daniel], quenched the fury of the flames [i.e., Shadrach, Meshach, and Abednego], and escaped the edge of the sword; whose weakness was turned to strength; and who became powerful in battle and routed foreign armies. (Hebrews 11:24–26, 32–34)

In Romans, we learn that Jesus’ ancestors were Israelites. Some of their names were copied from 1 Chronicles onto that mosaic floor. We also learn in Romans that Jesus is more than human. He is God, “forever praised!” In Hebrews, we read about great men of faith. These people trusted God for deliverance from worldly troubles and for eternal salvation. Notice that Moses, who lived about 1500 years before Christ, “looked forward” and placed his faith specifically “in Christ.” Notice also Daniel’s faith that God would rescue him from the lions and Shadrach, Meshach, and Abednego’s faith that God would rescue them from the flames.

All of these people — even though some of their names are hard to pronounce — are important because they looked forward to Jesus. The list of their names on that floor is a list leading to Jesus, slowly spelling his name, so to speak. In Jerusalem they sell a Hebrew translation of the New Testament. It spells “Jesus” like this:

The word means “the LORD saves.” After Jesus was conceived by the Holy Spirit, an angel told Joseph, “You shall call his name ‘Jesus’ because he will save his people from their sins.” (Matthew 1:21). From Adam to Abraham, from David to Daniel, from Joseph to Judgment Day, Jesus’ saving name paves the floor of the faithful — the promise on which God’s people forever stand.

“Salvation is found in no one else, for there is no other name under heaven given to men by which we must be saved.” (Acts 4:12).